Don’t you get bored of hearing the same songs over and over again on the radio? Well one thing that makes Israel fun is the complete randomness of the radio stations.

Only in Israel can you listen to Galgalatz and within 10 minutes, hear Robbie Williams followed immediately by The Beatles,  Rihanna (ella ella ay ay ay)…and concluding with Dana International before the commercial.

You just never know what’s gonna come on next!

Let’s talk about Schweppes. I was kind of excited to see this new product in the store the other day. Israel is really lacking in raspberry things…maybe because raspberries don’t really grow here in large quantities or something…but I’ve noticed that this culture isn’t really into raspberry stuff. No assortment of raspberry and chocolate candies or cakes…fresh raspberries in the grocery stores aren’t really existent. That’s ok though — considering the amount of other fabulous fruits that we find here. But sometimes I really want a raspberry something.

Anyway, so I saw this new item in the store the other day and it made me really happy. A raspberry fizzy drink. Nice! I flipped the bottle over and saw this…

What in the world are “sparkeling berries?”

Udi Manyak’s Guide to Not Being a Frier Tip #25: Driving Etiquitte

Maybe it’s because I spent most of the day driving doing last-minute errands before I leave for a couple weeks; maybe Shirat HaSirena inspired me with her inaugural post in what promises to be a helluva series on the driving around here.

In any case, I saw some f’d up shit the last couple days. So, I figured I’d come up with a few simple rules that I (obviously) should be practicing:

1. When approaching a traffic light on a multi-lane highway with one or more left turn lane: If the turn lanes are annoyingly backed up, go ahead and block whichever lanes you need to and squeeze in at the front of the line. Observe:

Don’t worry, the people behind you can just dangerously whip out into the quickly moving non-turn lanes (and it’s their fault for not leaving a good 8 or 9 lanes distance between that nasty backed-up turn lane).

2. Further to Rule #1, people behind you don’t really matter. They may not even exist — you’ve read Descartes, haven’t you? If you need to stop to unload something on a small, one-lane street, don’t bother pulling off to the side and lose those critical seconds (and risk being late to your hummus bath and/or matkot practice). Just stop, and take your time: 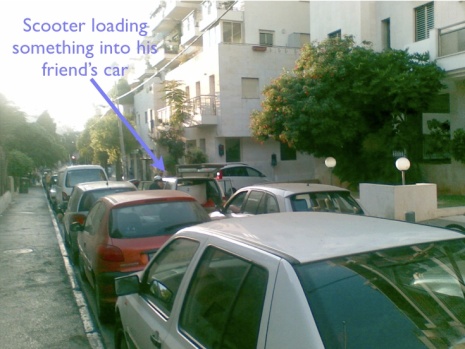 The only thing more annoying than the guy’s lame excuse for why he’s deliberately blocking traffic here is the incessant honking that ensued as a result. Which brings me to Rule #3…

3. Honk early and often. I can’t stress that enough — nothing helps clear that jammed up commute or moves a stalled car better than honking like a psychopath. Again, the pedestrians to whom its the most jarring and caustic sound possible *may not even exist.* It’s your right, no, your obligation to break the Israeli no-honking-within-city-limits law at least 90,394 times a day. Tel Aviv is a better place because of all your contributions to its colorful soundscape.

4. Never go through with any decision you’ve made in traffic should it prove inconvenient. This one’s a bit more subtle, and I wish I had the sense of mind to photograph the following two examples when they occurred, both in the last 48 hours:

a) If you suddenly realize, halfway through an intersection, that the lane you’re in is — by no fault of your own — a turn lane, go ahead and stop in the middle of the intersection. DO NOT GO THROUGH WITH YOUR TURN. You might have to actually go with the flow of traffic (frier’im!) and turn around where it’s safe to do so: that’s crazy talk.

b) On a highway on-ramp, if you see that the highway you’re entering is backed up, go ahead and put your car in reverse. Do not get on said highway and exit where and when it’s safe to do so. Refer to Rule #2 hummus bath / matkot dilemma. (Yes, I actually saw this on the Yarkon entrance to Road 5)

A lot of time is wasted on safety, and there’s no reason for that. Go with your gut.

The correct way to signal a lane change is to put at least 35% of your car in the target lane. DO NOT LOOK when doing this; this communicates indecisiveness. Those that try to make their own highway discos by running those silly blinkers from time to time are to be ignored, and whenever possible, gaps in traffic should be closed wherever you see them should they try to actually get in the lane they’re signaling for.

That’s it for now. Except this: HEY ISRAELI DRIVERS. DO ME A FAVOR AND KISS MY ASS.

Driving in Israel, Part I

I feel like driving in Israel deserves its own series. Why? Well because anytime you get on the road, either as a driver or as a passenger, you’re basically playing a game of Russian Roulette. Seriously. I feel like people say that about driving in New York too…but believe me when I tell you that driving in Israel is worse than anything you can imagine.

Anyway…I was smart enough to sort out the driver’s license business when I first moved to this country. I did a little lesson and took a little test and that was that. I knew I wouldn’t be driving anytime soon but I wanted to go ahead and get it out of the way. Finally, about two years after my arrival, I’ve been blessed with a car. A brand new car. Like many Israelis, I have leased a car through my company…it’s one of the perks of working in high tech. I’ve been lucky.

The first few days, I drove very timidly and cautiously and I was a friar. We’ve had that lesson on Zabaj before…what is a friar? A friar is someone who gets taken advantage of…the polite person or the quiet person…yeah…we get walked all over in this country. I had to quickly learn to assert myself on the roads. And I became very observant of all the mess that happens and all the really stressed out people behind the wheels of cars.

How can everyone be so stressed out? Well…it’s much like the escalator situation in this country. There just isn’t any urban planning. Everything is kind of thrown together. In America, you have all the up escalators grouped together so you can just go up and up and up without really pushing your way through crowds of people. Likewise with the down escalators.

In Israel…the up escalators and the down escalators are all clumped together so that whether you’re going up or down, you inevitably have to FIGHT traffic on each level to get to the next escalator. It makes absolutely no sense. And this is all besides the fact that people like to congregate and hover right on the entrance to every single escalator. For no reason. They just stand there and talk with old friends…completely blocking all traffic. Totally oblivious.

That’s how the roads are. The exit lanes onto major highways run parallel to the entrance lanes so everyone who is trying to get onto the highway has to merge with everyone trying to get OFF the highway. And it’s a long stretch of just utter chaos where everyone has to be extremely forceful and basically push people out of the way with their cars. It’s stressful for no reason. Where are the urban planners?

I feel like a great part of why everyone drives so insanely is because the way the roads are constructed make us insane. And I’ve found myself doing some insane things lately too! Like totally tailgating the car in front of me at high speeds because I know that if I am able to see his wheels touching the pavement, the guy to my right or to my left will suddenly decide he HAS to be in my lane…in front of me. It’s every man for himself out there…

Urban planners? Anyone? Anyone?

Reason I Sometimes Think About Moving #29082 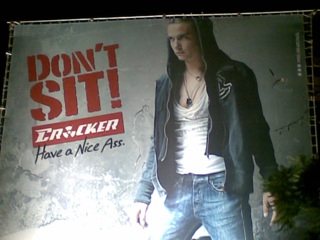 1) Who you callin’ a cracker, 2) I’ll sit if I damn well please, and 3) PLEASE can’t they have people who speak English read these things before they make giant nonsensical billboards out of them?!

And wow way to be extra edgy and hip by making the ‘O’ in your brand name…wait for it…a *RADIOACTIVE* symbol. Oooh wear these jeans and you’ll be so cool and ATOMIC. I can almost picture the smoked out, Fraggle Rock red-dyed Henna hair marketing twit that came up with this ridiculous slogan. “Ze cacha omrim — hev a nize day — omrim hav a nice azzz” (undeserved applause by all in the boardroom).